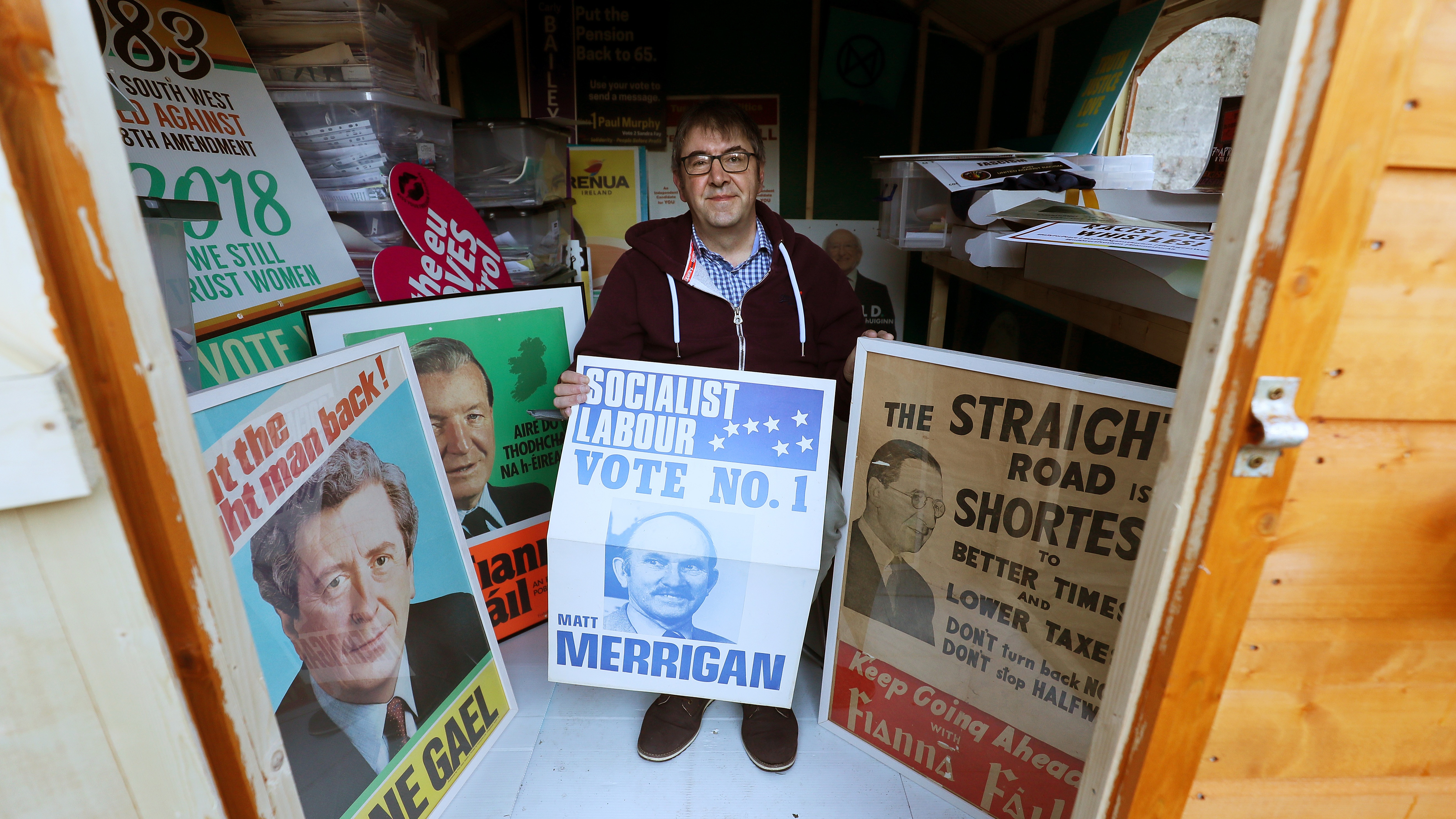 A man who has been collecting election posters, political leaflets and memorabilia for almost 40 years is harbouring ambitions of opening a museum.

Alan Kinsella began his collection in 1982, and estimates that it includes more than 500 posters and some 50,000 leaflets, charting the Irish political landscape as far back as the 1910s.

Although the vast collection, which charts in great detail a century of Ireland’s political and social history, currently resides in a shed in Mr Kinsella’s back garden, his dream is to open a full-time museum.

He told the PA News Agency: “If I won the lotto, I’d open a museum. I think it would be an attraction.

“There’s a politics in the Leaving Cert and so on. I think it would… certainly be a huge educational aspect to it. It’s unique. You get history, you get social history.

“There’s great history in them. History of people, history of parties and so on.”

The collection includes a fascinating number of political oddities, such as Labour Party-branded condoms, Sinn Fein harmonicas and a set of disinfectant wipes bearing the image of former health minister Simon Harris – released prior to the pandemic.

Among his prized possessions is a poster from the 1917 East Clare by-election, remembered more than a century on for announcing Eamon De Valera’s arrival on the political stage.

“Even thinking about that, it’s kind of weird, in that it’s pre-suffrage. So the electorate was male-only. Aside from it being Dev, there’s another story to the material itself,” Mr Kinsella said.

Mr Kinsella began his collection as a teenager in 1982, when he was brought along to a local election by his parents and he didn’t look back from there.

He said: So, that’s what happens… a lot of collectors when they start as children, suddenly they get into their 20s, and they start to move about. Suddenly they’re not able to take everything with them, or they don’t have the space.

“I was able to hold on to it and keep it intact. Just over time, it grew and then I suppose in the early 2000s I realised what I had.

“Because it would have been something I was almost embarrassed about, in that you’re asking somebody, ‘You know that stuff that comes in your letterbox? Can I have that?’”

These days Mr Kinsella does exhibitions all over the country, and is invited by all the major political parties to do displays at their Ard Fheiseanna.

When Australia held its same-sex marriage referendum in 2017, activists reached out to Mr Kinsella to ask what they could expect from the No campaign.

“Nobody keeps this stuff except me,” Mr Kinsella said, “so I ended up sending a lot of stuff over to Australia to help out.”

While opening his own museum remains the dream, for the moment Mr Kinsella is just looking forward to getting back to exhibitions after the pandemic.

He said: “I remember when I was doing my first exhibition in the print museum. I just assumed it would be only political nerds who were interested.

“But it had a far, far wider appeal. A big part of it was nostalgia.

“Obviously, there was the politics. But it was also entertaining and bringing back memories and everything. There is a far wider appeal than we previously thought.”

Today’s sports news: What you need to know – RNZ

Lewis Hamilton: The exceptional kid who conquered the world – BBC...

The Future Of Healthcare Is Mobile – Forbes